It’s that time of the year that creeps up quicker than any other. Book Week. Now I will preface this with saying that any week that celebrates putting down the god damn iPad and picking up a book is a great week, but again, this isn’t something anyone warns you about when you step into the world of parenting. I love a dress up, always have, for my year 8 music exam I dressed up in full showgirl costume, headdress and feather boa included and sang Gloria Gaynor’s ‘I Will Survive” as you could imagine this was probably not a great choice growing up in a suburban high school that was built on a surf culture, but none the less, I nailed it. My love of dressing up has been passed on to my kids, we have a couple of dress up boxes with wigs and costumes in our house. So if book week does my head in, I could only imagine what it must do to a lot of other people. Now I’m still at the preschool level of book week, which is harmless and cute. There is no competition, all the kids look great regardless of what they are wearing – mostly green and they are either the sheep that nobody can find or the hungry caterpillar. What scares me is the primary school parade, this is where book week stops being about the kids. It’s for Karen who is a wiz on the Janome, has a loyalty card at Spotlight and has spent all year on Pinterest finding what is needed to turn her daughter into a 52 story tree-house. Deidre loves book week, in between buying P.E Nation active wear from Style Runner and popping down to Dan Murphys for the sale on the Pinot Grigo she has been scouting the local fancy dress shops to find the perfect costume not matter what the cost or in fact if her kid has even read that book. But personally, I love the last minute costumes that Mum knocked up the night before, or the one that dad was in charge of and little Xavier has rocked up to school in his Saturday morning cricket whites and has a moustache drawn on wearing a gold chain and his book is “Menace: The Dennis Lillee Autobiography”. I think book week needs to chill out a little bit, especially at the “big school” level, I think the rule should be if a kid comes to school in a better costume than Heidi Klum at Halloween they’ll be forced to go home to put a mop on their head and they are now Grug. See you later #bookweek, I’m off to upload pics of my kids in their outfits to every social media platform I have and then start planning for Halloween and next years Easter Hat parade. 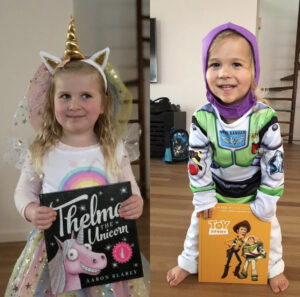 Written by Matt Basely. Matt is a stay at home dad of three and a regular contributor here at Kiindred. We love his musings on parenthood from his days spend with his three little ones.

Navigating the 5th trimester – returning to work on your terms

“The hardest part about parenting so far was coming back to work” –  Lauren Smith Brody The 4th trimester, a now famous term first coined by Dr. Harvey Karp, paediatrician and author of Happiest Baby on the Block, refers to the first 3 months of a baby’s life after birth. Dr. Karp explains that babies are born too soon; unlike other mammals who are born being able to walk (more or less), human babies, who...

There’s a 6-year gap between my two children so when my second one came along I’d forgotten about the witching hour. Probably mother nature had cleverly given me amnesia so I couldn’t remember, but it took me...

Can you get pregnant if your period hasn’t returned?

You’ve just welcomed your little one to the world and your life has surely changed an incredible amount! Settling into this new territory has plenty of challenges but numerous exciting moments. From the nappy changes to...

Stay in the loop on all things parenthood as we share tips, hacks, products, inspo & everything in between. We promise not to clutter your inbox.